Bazza The Bogan Barbarian is an Australian action graphic novel series published by Silver Fox Comics. The series follows the titular character in various adventures to save Australia from different types of extinction-level events and invasions.

Bazza - known as the Bogan Barbarian. He is a local prizefighter who lives in the Outback. He is a known survivalist and a master combatant.

Dazza - Bazza's father and a lifelong farmer. Lives near Bogan River in an outback farm. Dazza has the ability to speak with animals.

Shazza Kelly - Bazza's wife. Known for roughhousing Bazza when he needs it the most. She's also a master markswoman and martial artist.

Thriller and Killer - Dazza's pet drop bears pretending to be a pair of koalas.

Eddie - A militaristic emu who wants emus to rule the country. 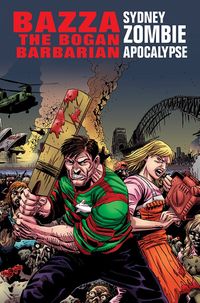 "Bazza the Bogan Barbarian, and his wife Shazza Kelly from Kellyville defend family and home in Sydney Zombie Apocalypse.

"Meet Bazza, he barracks for Souths Sydney, he loves his Vegemite, he dunks meat pies in beer, he hates hipsters, and he's having the time of his life killing Zombies while rescuing his daughter Michelle. At first he's armed with the weapon every Aussie should have - a cricket bat signed by Sir Donald Bradman - after all it smashed the Poms and it’ll smash the Zombies. But when he rejoins the army in the midst of his mid-life crisis, he gets what he always wanted - a master and commander blasting tank!

"Meanwhile his Missus - Shazza, she's back at home defending the back yard chook shed from a horde of Zombie neighbours. She's not to be outdone either in the zombie killing department. She's armed with a range of kitchen utensils and a chainsaw. Now do you hate our budgie smuggler wearing Aussie politicians? Well so do we, see what happens!"

The story is written by Sorab Del Rio, with pencils and inks from Emerson Dimaya. The comic's colours are courtesy of Simon Wright, whilst the lettering is courtesy of Don and Jessica Ticchio. The comics is directed by Don Ticchio, together with Sorab Del Rio. "Bazza the Bogan Barbarian and the drop bears Thriller and Killer defend the family homestead in an Australian Alien Invasion.

Meet Bazza the Bogan Barbarian, he barracks for Souths Sydney, he loves his Vegemite, he dunks his meat pies in beer, he smashed Zombies for six with a Bradman bat in a Sydney Zombie Apocalypse, and he hates hipsters and the Roosters.

When his childhood pet Dingo called Dingo is killed by carnivorous Aliens, well by jingo, by crikey that takes hate to another level. [email protected]@# oath it does, Bazza puts pedal to the medal on his big Mack semi, and with ACA DACA's TNT playing, he heads home to his Dad's country property for revenge.

Along with Bazza is Killer and Thriller, two dangerous drop bears, Eddie the Emu, Bazza's Dad Dazza and his gun-toting Nan, who did a face swap with Bob Hawke but never gave his face back."

Carnivorous Cane Toads On a Cruise 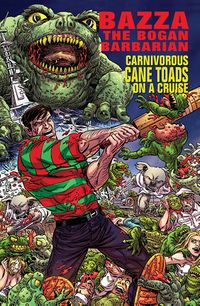 "Meet Bazza the Bogan Barbarian, he barracks for Souths Sydney, he loves his Vegemite, he dunks his meat pies in beer, he hates hipsters and he hates the Roosters even more. He’s smashed Zombies, he’s battled Aliens, and now he faces the greatest enemy of all - Carnivorous Cane Toads!

"It’s summertime and Bazza, his wife Shazza, the kids Aero, Michelle, and the drop bears Thriller and Killer are cruising the South Pacific onboard Pacific Dusk. Off the coast of Seduction Island, the ship is attacked by an invasion of Carnivorous Cane Toads.

"Disgustingly slimy, oozing with warts, they crawl, they creep, they jump, they hump, they tear strips off you with ferocious fangs and they eat you alive. Led by the mysterious and enchanting Queen Rihanna, Bazza is forced to make the ultimate choice of betraying his family, or saving the lives of two thousand passengers.

"Be wary holiday makers, this sounds impossible, implausible, unbelievable but I tell you, this could happen when you’re on a tidal wave of terror in a holiday from hell!"

Bazza, The Bat and The Drop Bears 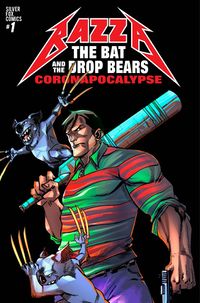 "Bazza the Bogan Barbarian, the Drop Bears Thriller and Killer, a sentient cricket bat and a talking Torana battle zombies, carnivorous cane toads and giant spiders against the backdrop of Covid-19 in a night of maximum mayhem."

"This is Australia’s wildest comic! Meet the Australian legend Bazza the Bogan Barbarian. Bazza’s a boss, he’s got two drop bears Thriller and Killer, and he runs “Bazza’s Monster Killing Business” from his man cave in Deadfern, South Sydney. Bazza barracks for South Sydney, he loves his vegemite, he dunks his meat pies in beer and he’s armed with the weapon every Aussie should have - a cricket bat signed by Donald Bradman. It’s more than a cricket bat, it’s a sentient cricket bat who might just be Bazza’s conscience. Bazza’s married to his ball-breaking wife Shazza, who’s quite the monster killer herself. Together they got two little teenage squids Aero and Michelle."